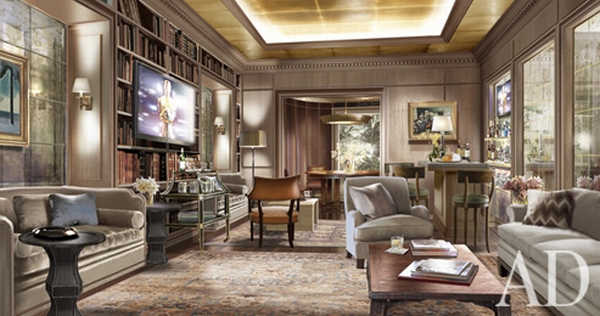 Here’s the Oscar® Buzz. Where will the stars be as they wait to hit the stage at the 83rd Annual Academy Awards® on Feb. 27? The Architectural Digest Greenroom, of course!

Each year Architectural Digest selects a noted designer to transform a raw space into a backstage oasis for presenters and winners alike on Hollywood’s biggest night. This year, interior designer Michael S. Smith—who was appointed in 2010 by President Obama to the Committee for the Preservation of the White House—is the man for the job. His vision for the room is inspired by luxe, tailored 1940’s Hollywood style, complete with a sophisticated color palette and furnishings that reflect the era.

How can you direct a feature presentation like this in your home? Let’s study the scene. Washed in neutrals, the drama starts with the built-in architectural details including the lighted tray ceiling, bookcases, and framed mirror faux windows. The paneled walls and crown moldings are strong crowd pleasers. The playful floral pattern in the Persian carpet grounds the room in the traditional category. The supporting actors are all the curvaceous furnishings while the stars are the sofas with tufted bench seats, bolster pillows and wrapped construction.

The critics have spoken. It’s two thumbs up for this winner! No doubt, James Franco and Anne Hathaway will want to linger in this luxurious setting once the presentations are over.